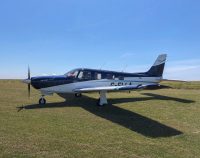 This plane looks and flies as new with all the latest upgrades, Ad and SB completed.